Lodge Ethos meets on the Third Wednesday of each month (excluding December and January) at the Canberra Masonic Centre, 4 Heard Street, Mawson, ACT

It is one of seven Masonic Lodges meeting in the Australian Capital Territory.

Lodge Ethos was established (consecrated) on the 29th February 1964. It was given the number 963 from the United Grand Lodge of New South Wales and the Australian Capitol Territory.

‘Ethos’ is a Greek word. It means and refers to the spirit of the community. The statue of ‘Ethos’, from which the Lodge motif is taken, stands in Canberra’s Civic Square. It was erected in 1962 — under the generous sponsorship of the Canberra Chamber of Commerce.

Memories are a little hazy as to which Brother first suggested the name ‘Ethos’ at the meeting held on 20 March 1963. The consensus seems to be that the originator was Bro. Stewart East (Foundation Junior Deacon and W. Master — a chartered accountant and member of the Canberra Chamber of Commerce). Bro. East was very ably encouraged in him proposal by W. Bro. Max Robinson (the Foundation Worshipful Master) and Bro. Norm Snedden (Foundation Senior Warden and later a Worshipful Master). To these Brothers, including Bro. Gordon Matthew and indeed to all the brethren present that evening, we are indebted for the ultimate choice of a Lodge name. It was an appropriate choice for a new Lodge in a new city, in what was and still is a very new part of Australia. 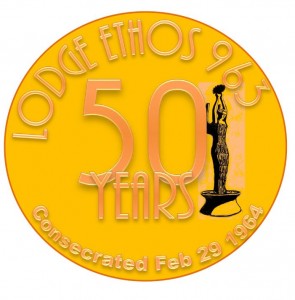 The statue of ‘Ethos’, shows a young figure in embroidered cloth into which is woven the many facets of community life. The figure holds aloft a blazing son, symbolic of the culture and enlightenment found in a progressive community. It will not pass unnoticed that the Sun is also a primary Masonic symbol.

The Order of Proceedings for the Consecration and Installation of the Foundation Master of Lodge Ethos makes fulsome reference to the philosophy underlying the choice of name and reminds us that;—

‘Thus the statue and name, representing as they do the spirit of the community of Canberra (and therefore the Commonwealth of Australia) were chosen as the symbol and name of this Lodge by the foundation members to mark the emergence of Canberra as the real capital of Australia — a nation rapidly emerging as a force in the international sphere, not because of its mime, but because of the principles and spirit of the brotherhood of man, which Australia and its people represent.’ 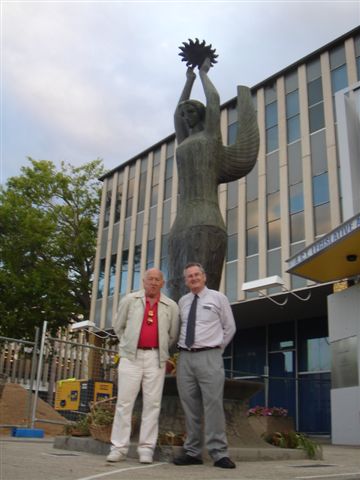